Measuring dependence in the Wasserstein distance for Bayesian nonparametric models

Bayesian nonparametric (BNP) models are a prominent tool for performing flexible inference with a natural quantification of uncertainty. Traditionallly, flexible inference within a homogeneous sample is performed with exchangeable models of the type \(X_1,\dots, X_n|\tilde \mu \sim T(\tilde \mu)\), where \(\tilde \mu\) is a random measure and \(T\) is a suitable transformation. Notable examples for \(T\) include normalization for random probabilities (Regazzini et al., 2003), kernel mixtures for densities (Lo, 1984) and for hazards (Dykstra and Laud, 1981; James, 2005), exponential transformations for survival functions (Doksum, 1974) and cumulative transformations for cumulative hazards (Hjort, 1990).

Very often, though, the data presents some structural heterogeneity one should carefully take into account, especially when analyzing data from different sources that are related in some way. For instance this happens in the study of clinical trials of a COVID-19 vaccine in different countries or when understanding the effects of a certain policy adopted by multiple regions. In these cases, besides modeling heterogeneity, one further aims at introducing some probabilistic mechanism that allows for borrowing information across different studies. To achieve this goal, in the last 20 years a wealth of BNP models that rely on partial exchangeability have been proposed (see Cifarelli & Regazzini (1978) for prioneering ideas, MacEachern (1999, 2000) for seminal results and Quintana et al. (2021) for a recent review). The general recipe consists in assigning a different random measure \(\tilde \mu_i\) to every data source or group of observations and then introduce flexible forms of dependence between the random measures. For simplicity we stick to the case of two groups, so that the partially exchangeable models are of the general form \[\begin{equation} \tag{1} X_1,\dots,X_{n_1}| (\tilde \mu_1, \tilde \mu_2) \stackrel{\text{iid}}{\sim} T(\tilde \mu_1); \qquad \qquad Y_1, \dots, Y_{n_2} | (\tilde \mu_1, \tilde \mu_2) \stackrel{\text{iid}}{\sim} T(\tilde \mu_2); \end{equation}\] and \((\tilde \mu_1, \tilde \mu_2) \sim Q\) is a vector of dependent random measures. The borrowing of information across different groups is regulated by the amount of dependence between random measures. One can picture two extreme situations:

Thus, it is crucial to translate one’s prior beliefs on the dependence structure into the specification of the model. Interestingly, though there have been many proposals on how to model dependence, few results on how to measure it are available. The current state-of-the-art is given by the pairwise linear correlation between \(T(\tilde \mu_1)\) and \(T(\tilde \mu_2)\), which provides a useful proxy based on the first two moments of the random measures, but it does not take into account their whole infinite-dimensional structure. We thus look for a measure of dependence with the following properties:

We point out that this last property is fundamental because it allows to fix the hyperparameters of BNP models so to achieve the desired level of dependence.

Our proposal is based on two main ideas: 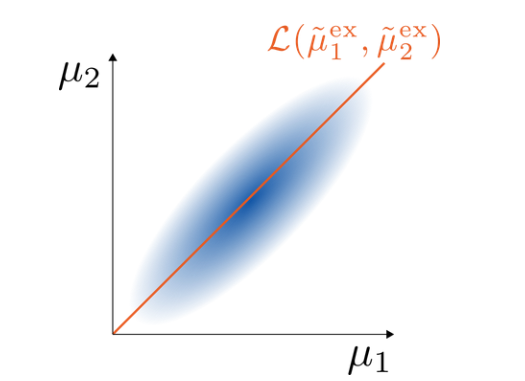 In our work (Catalano et al., 2021) we face the challenges above and obtain the following results:

Putting these three elements together, we are able to derive strict upper bounds of the distance in (2) for noteworthy models in the BNP literature, which include compound random measures (Griffin & Leisen, 2017; Riva-Palacio & Leisen, 2019), Clayton Lévy copula (Tankov, 2003; Epifani & Lijoi, 2010) and additive models (Griffiths & Milne, 1978; Lijoi et al., 2014). These upper bounds are expressed in terms of the hyperparameters of the corresponding models (see Figure 2) and thus enable a principled prior specification of their dependence structure.

In Catalano et al (2021) we have moved the first steps. Yet, there are a number of questions that still remain open. In particular,

In Catalano et al (2022+) we deal with these questions. Their answer sheds light into the deep geometric properties of the Wasserstein distance, which are key to the definition of a Wasserstein Index of Dependence in [0,1]: our goal since the beginning. This opens interesting research directions on how to use the index to assess heterogeneity in the data, going beyond the restrictive assumption of independence.

Doksum, K. (1974). Tailfree and neutral random probabilities and their posterior distributions. The Annals of Probability, 2(2):183–201.