The Whittle likelihood is computationally a very attractive method. Thus, it has become a popular method for parameter estimation of both long and short memory stationary time series. Moreover, the Whittle likelihood has gained traction as a quasi-likelihood between the periodogram and conjectured spectral density.

The Contribution of this paper is three-fold:

In the following sections, we summarize each contribution.

We introduce our main theorem which obtains a transform that is biorthogonal to the DFT.

Contrasting the Gaussian and Whittle likelihood

Using the complete DFT, we can represent the Gaussian likelihood in the frequency domain.

From the above theorem, we observe that the difference between the Gaussian and Whittle likelihood is due to the linear predictions outside the domain of observation. We interpret the Gaussian likelihood in terms of the information criterion. The Whittle likelihood estimator selects the spectral density \(f_\theta\) which best fits the periodogram. On the other hand, since the complete DFT is constructed based on \(f_\theta\), the Gaussian likelihood estimator selects the spectral density which simultaneously predicts and fits the time series.

For both the specified and misspecified case, the Gaussian and Whittle likelihood estimate the spectral divergence between the true spectral density \(f\) and the conjectured spectral density \(f_\theta\): \[\begin{equation*} \mathbb{E}_f [\mathcal{L}_n(\theta)] ~~\text{or} ~~ \mathbb{E}_f [K_n(\theta)] = I(f;f_\theta) + O(n^{-1}), \end{equation*}\] where \(I(f;f_\theta) = n^{-1}\sum_{k=1}^{n}\big(\frac{f(\omega_k)}{f_\theta(\omega_k)} + \log f_\theta(\omega_k)\big)\). Therefore, even for the misspecified case, asymptotically, both estimators have a meaningful interpretation. However, there is still a finite sample bias in both likelihoods which is of order \(O(n^{-1})\). To remedy this, we introduce a new frequency domain quasi-likelihood criterion:

We mention that by a similar argument to that given above, one can also taper the regular DFT (but not the complete DFT) when defining the boundary corrected Whittle (the result we called it the hybrid Whittle likelihood). In the simulations, we have observed that this can often out perform the other likelihoods.

To end this post, we present some estimation results under misspecification. For sample size \(n=20\), the true data generating process is a Gaussian ARMA\((3,2)\) process, but we fit the following two models 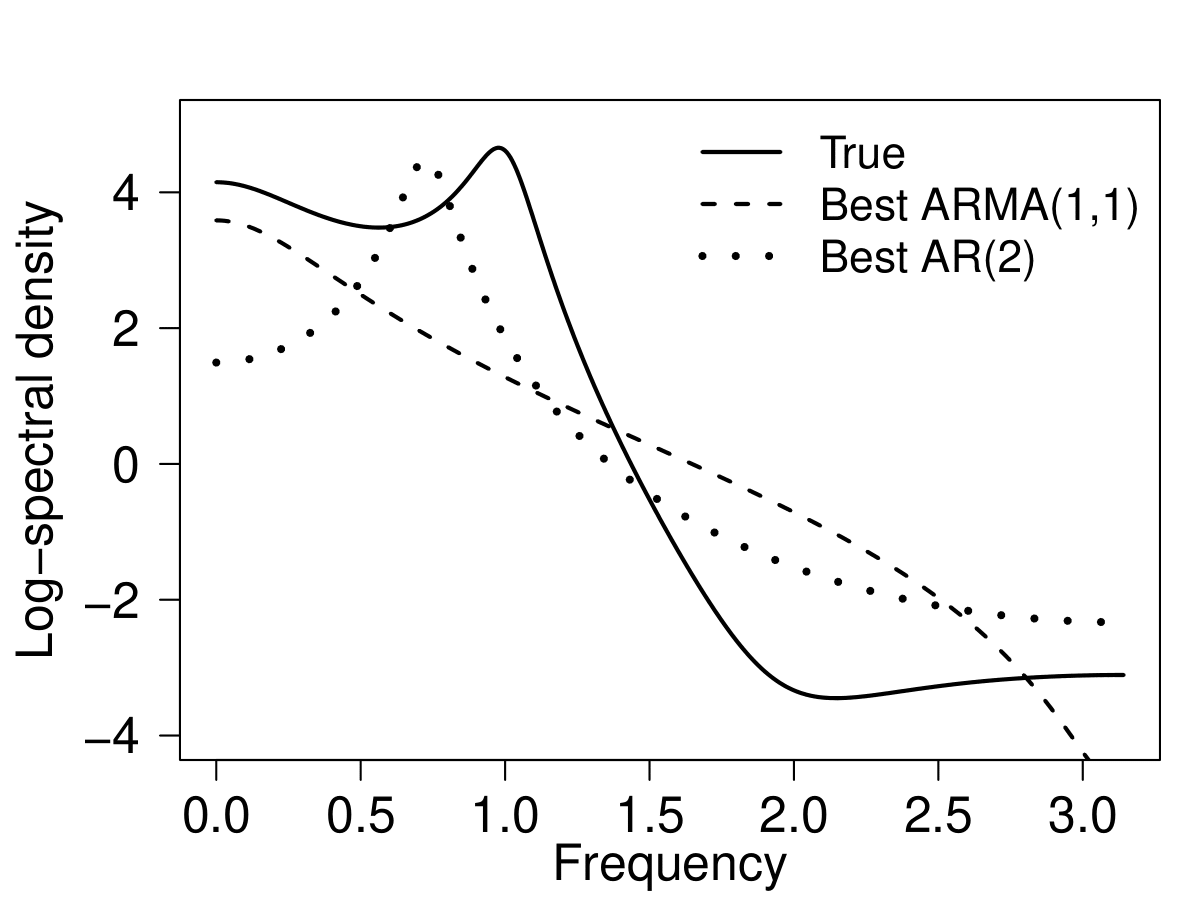 All simulations are conducted over 1,000 replications and for each simulation, we calculate the parameter estimators of five quasi-likelihood criteria: (1) the Gaussian; (2) the Whittle; (3) the tapered Whittle; (4) the boundary corrected Whittle; and (5) the hybrid Whittle.

The table below shows the bias and the standard deviation (in the parentheses) of the estimated coefficients and spectral divergence. Red text denotes the smallest root-mean-square error (RMSE) and Blue text denotes the second smallest RMSE.

Based on the above table, we conclude that

Junho Yang is an Assistant Research Fellow in the Institute of Statistical Science at Academia Sinica, Taiwan. His research focuses on time series analysis, Toeplitz matrices, and spatial statistics and its applications.