In the past decades, intelligent transportation system (ITS) has brought advanced technology that enables a data-rich environment and unprecedented opportunities for traffic prediction, which is considered as one of the most prevalent issues facing ITS (Li et al., 2015). We discuss the online prediction of the origin-destination (OD) demand count in traffic networks, which represents the number of trips between certain combinations of an origin and a destination. The study of OD demand prediction based on count data has a growing impact on many traffic control and management policies (Ashok, 1996, Ashok and Ben-Akiva, 2002, Li, 2005, Hazelton, 2008, Shao et al., 2014). For example, dynamic OD demand prediction is critical in planning for the charging services of the electrical vehicles (EV; Zhang et al., 2017). A well-designed charging facility network is necessary to extend the vehicle range and popularize the use of EVs. In particular, the dynamic demand between nodes of the traffic network plays a key role in determining the availability of the charging facilities, planning the multi-period charging schedules, and meeting the customer needs at the maximum extent (Zhang et al., 2017, Brandstatter et al., 2017). The objective of this study is to appropriately model the stochastic OD traffic demand counts considering the spatiotemporal correlations between different routes and epochs, while incorporating physical knowledge of the traffic network in the estimation. The estimation results are expected to enhance the prediction accuracy and robustness of the online traffic demand prediction for future epochs.

We investigate a multivariate Poisson log-normal model with a block-diagonal covariance matrix and incorporate domain knowledge of the traffic network features to account for spatial correlations. Let \(N_{\text{ijt}}\) denote the observed traffic demand (i.e., the count of vehicles) for route \(j\) on day \(i\), at epoch \(t\). Based on the natural characteristics of the demand counts, it is reasonable to model each observation \(N_{\text{ijt}}\) with a Poisson log-linear model (Perrakis et al., 2014, Xian et al. 2018) such that

In this way, we can fully explore the complicated spatiotemporal correlation structure of the traffic network demand and automatically cluster the routes with high correlations, without introducing a large number of parameters that impact the estimation accuracy. Besides transportation systems, the proposed method can be easily extended to other network applications with count data through few modifications, such as communication systems, supply chain management, smart grid, or even three-dimensional networks (Wang et al., 2018).

We apply the proposed method to a real New York yellow taxi dataset which is collected from June 1st to July 31st in 2017 (NYC taxi, 2017). The dataset records all yellow taxi trips during the aforementioned time period including the pick-up and drop-off dates and times, pick-up and drop-off locations, trip distances, and payment information about the trips. We focus on the trips between the four busiest zones in Manhattan and investigate the structure of the travel demand counts on these zones as OD pairs. The details of the four taxi zones are shown in Figure 1. 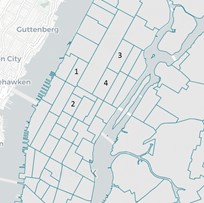 Figure 1. Illustration of the taxi zones in the case study

Figure 2 further shows the specific taxi demand prediction results of two routes \((4,\ 3)\) and \((4,\ 4)\) for four test days. The solid black line in this figure represents the true dynamic traffic demand counts, where it can be observed that the true taxi demand indeed exhibits high spatial and temporal variation and strong correlations for observations between the routes and across different epochs. The solid red line in is the predicted demand using the proposed method, and the dashed error bars show the 90% confidence interval of the prediction based on the variance derivation in equation (7), which significantly outperforms the existing method shown in black dotted line. 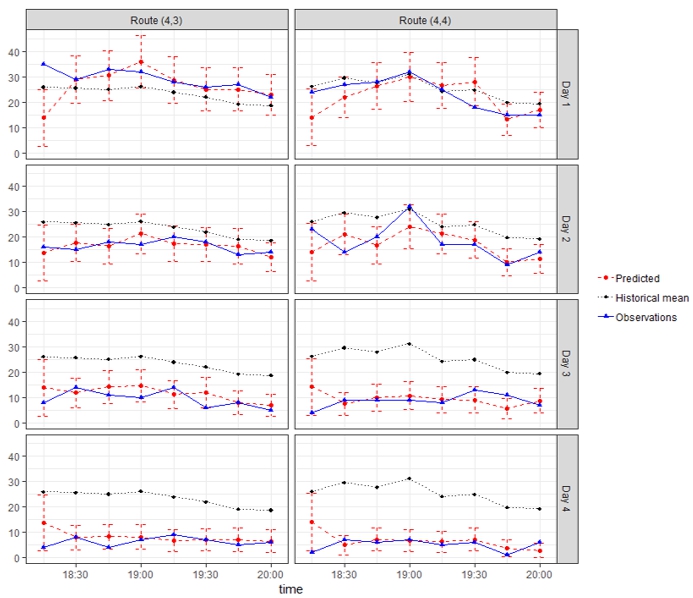