Let us start by considering the optimal rejection policy for a single hypothesis testing problem. There are three elements to the problem. The objective: to maximize the power to reject the null hypothesis; The constraint: to control the type I error probability, so that it is at most a predefined \(\alpha\); The decision policy: for every realized sample define the decision \(D\in \{0,1\}\), where the null hypothesis is rejected if \(D=1\) and retained otherwise. For simplicity, let \(z\) be the realized test statistic on which the decision \(D\) is based, and let \(g(z\mid h=1)\) and \(g(z\mid h=0)\) be, respectively, the non-null and the null density of \(z\). The optimization problem is therefore: \[\max_{D:\mathbb R \rightarrow \{0,1\}} \int D(z)g(z\mid h=1)dz\\ s.t.\int D(z)g(z\mid h=0)dz\leq \alpha. \] This infinite dimensional integer problem happens to have a simple solution provided by the Neyman-Pearson (NP) Lemma.

In this era of big data, conducting a study with a single hypothesis is rare. In many disciplines, hundreds or thousands of null hypotheses are tested in each study. In order to avoid an inflation of false positive findings, it is critical to use multiple testing procedures that guarantee that a meaningful error measure is controlled at a predefined level \(\alpha\). The most popular measures are the family wise error rate (FWER), i.e., the probability of at least one type I error, and the false discovery rate (FDR), i.e., the expected false discovery proportion.

Arguably, it is just as critical that the multiple testing procedure will have high statistical power, thus facilitating scientific discoveries. As with the single hypothesis testing problem, we take an optimization approach to the problem with \(K>1\) null hypotheses: we seek to find the \(K\) decision functions, \(\vec D: {\mathbb R}^K\rightarrow \{0,1 \}^K\), that maximize some notion of power while guaranteeing that the error measure is at most \(\alpha\). In this post, we shall consider the problem of finding the optimal decision functions when testing multiple hypotheses in a couple of settings of interest.

An optimal policy for the design of clinical trials

Assume that \(K=2\) hypothesis testing problems are examined in a clinical trial (e.g., treatment effectiveness in two distinct subgroups). The federal agencies that approve drugs typically require strong FWER control at level \(\alpha = 0.05\). At the design stage, it is necessary to decide on the number of subjects that will be allocated. For \(K=1\), this is typically done by computing the minimal number of subjects for achieving minimal power with a type I error probability of \(\alpha\). For \(K=2\), with a relevant notion of required power \(\Pi(\vec D)\), a smaller number of subjects will need to be allocated, if the multiple testing procedure is the optimal policy, rather than an off-the-shelf policy. However, finding the optimal policy may be difficult since the policy has to guarantee that for every data generation with at least one null parameter value, the probability of rejecting the null hypothesis corresponding to the null parameter value should be at most \(\alpha\) (i.e., there may be an infinite number of constraints for strong FWER control at level \(\alpha\)).

We also add the common-sense restriction that \(p\)-values above \(\alpha\) are not rejected (for details, see Heller, Krieger, and Rosset 2021).
The resulting optimal rejection policy is attractive for relevant objectives \(\Pi(\vec D)\) that can be useful for clinical trials. Below we provide one example optimal policy: the policy maximizing the average power when both test statistics have expectation -2 (left panel). For comparison, we provide the off-the-shelf popular Hochberg procedure (which coincides with the Hommel procedure for \(K=2\)). Both policies satisfy the strong FWER control guarantee at level \(\alpha = 0.05\), but the average power of the optimal policy is 3% higher (63% versus 60%) if the test statistics are normally distributed with expectation -2. The color coding is as follows: in red, reject only the second hypothesis; in black, reject only the first hypothesis; in green, reject both hypotheses. 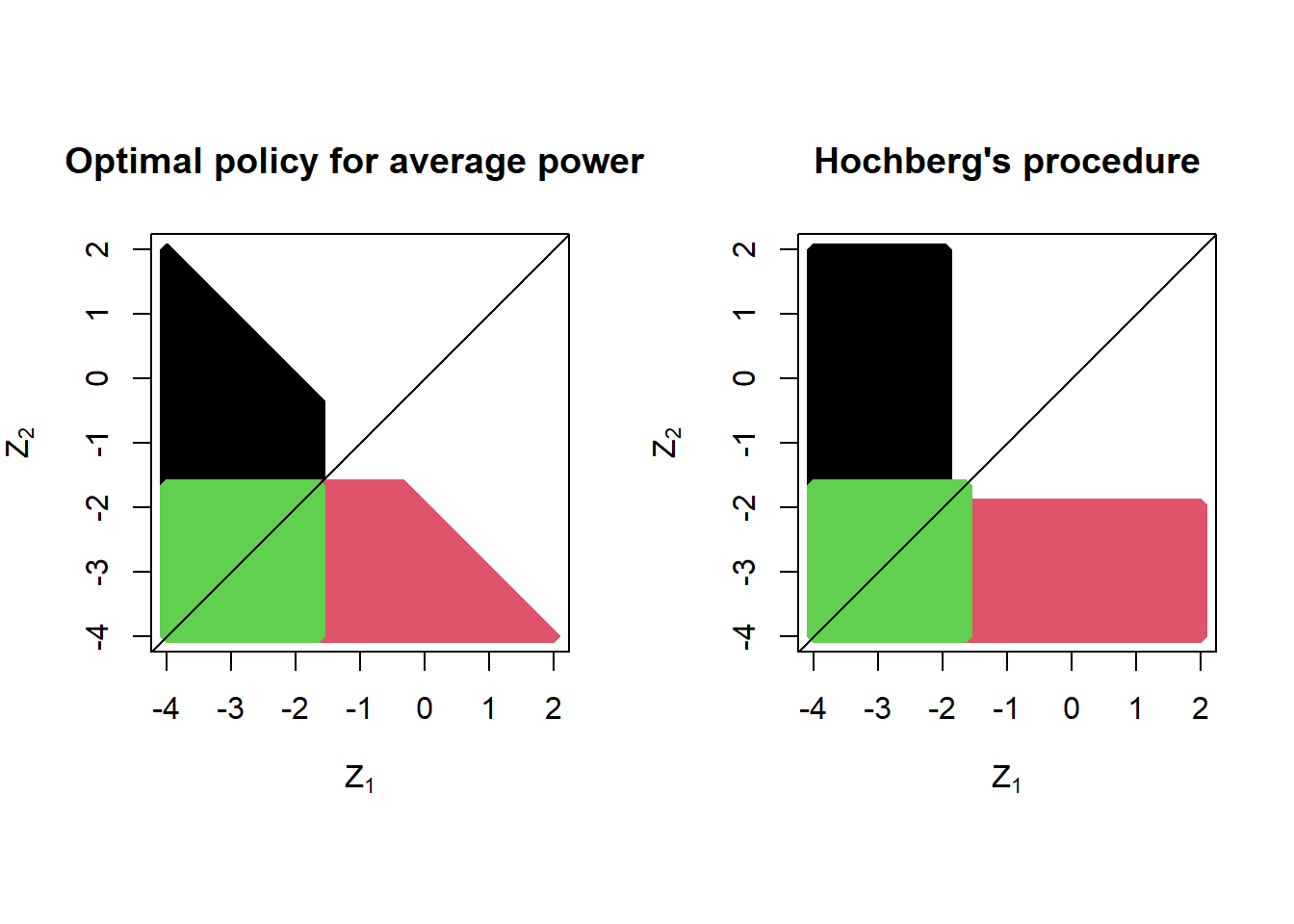 Ruth Heller is an Associate Professor of Statistics at Tel-Aviv University, Israel, ruheller@gmail.com. Her research interests are in multiple comparisons, nonparametrics, and observational studies.

Saharon Rosset is a Professor of Statistics at Tel-Aviv University, Israel, saharon@tauex.tau.ac.il. His research interests are in Statistical Learning theory and methods and in Statistical Genetics.