Binary classification is one of the cornerstones of modern data science, but, until recently, our understanding of classical methods such as the k-nn algorithm was limited to settings where feature vectors were compactly supported. Based on a new analysis of this classifier, we propose a variant with significantly lower risk for heavy-tailed distributions.

The basic classifier that we consider here was introduced by Fix and Hodges (1951), and is arguably the simplest and most intuitive nonparametric classifier. For some fixed value of \(k\), we classify a test point \(X\) to the class that is most prevalent among the \(k\) points in our test data which lie closest to \(X\). 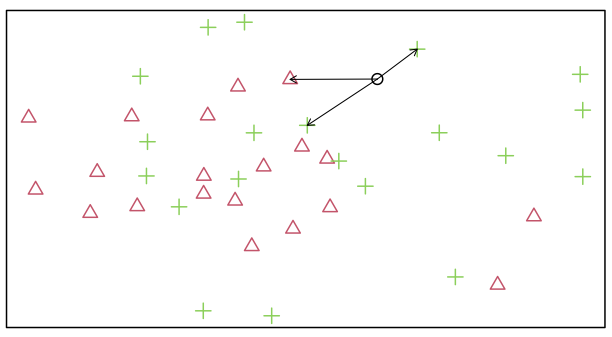 The choice of \(k\) will clearly have a huge impact on the performance of the classifier. It is often chosen using cross-validation so that, over many splits of the data set into test set and training set, we choose the value of \(k\) that gives the most accurate predictions over all points.

Our main finding is that it is often possible to achieve better performance when the value of \(k\) is allowed to depend on the location of the test point. Indeed, for some constant \(B\) (which may be chosen by cross-validation), when \(n\) is the sample size, \(\bar{f}\) is the marginal density of the data points, and \(x\) is the test point, we find that a choice of \(k\) roughly equal to \[\begin{equation} \tag{1} B \{ n\bar{f}(x) \}^{4/(d+4)} \end{equation}\] results in minimax rate-optimal performance over suitable classes of data-generating mechanisms. In contrast, for heavy-tailed data we see that the standard, fixed-\(k\) classifier is suboptimal. Although \(\bar{f}\) is usually unknown, it can typically be estimated well enough from data. In fact, in many modern applications we have access to large amount of unlabelled \(X\) data that can be used for this purpose.

Given full knowledge using knowledge of the underlying data-generating mechanism, the optimal decision rule is the Bayes classifier, which assigns points to the class with largest posterior probability. As even this optimal classifier makes mistakes, we typically evaluate the performance of a data-driven classification rule by comparing it to the Bayes classifier. Given a classification rule \(C:\mathbb{R}^d \rightarrow \{0,1\}\), define its excess risk to be \[ \mathcal{E}_P(C)= \mathbb{P}_P\{C(X) \neq Y\} - \mathbb{P}_P\{C^\mathrm{B}(X) \neq Y\}, \] where \(C^\mathrm{B}\) is the Bayes classifier, \(X\) is the test point and \(Y\) is its true class label such that \((X,Y)\) has distribution \(P\). This quantity is non-negative and equal to zero if and only if \(C\) is optimal. Classifiers that make similar predictions to the Bayes classifier perform well.

The data is displayed in the left-most plot of Figure 2, together with vertical lines indicating the action of Bayes classifier, which selects class 0 when the data points lie between the two lines and selects class 1 otherwise. First, we run the standard \(k\)-nearest neighbour classifier on the data, with the value of \(k\) chosen by leave-one-out cross-validation from \(\{1,\ldots,20\}\). The middle plot of Figure shows those points of the data set for which the standard classifier classifies differently to the Bayes classifier. Finally, we run our local classifier, where we assume that \(\bar{f}\) is known, and where the value of \(B\) is chosen by leave-one-out cross-validation on a grid of size \(20\).

This post was written by Thomas B. Berrett, and was based on